A Lousy Day In Harlem

by The Ed Palermo Big Band 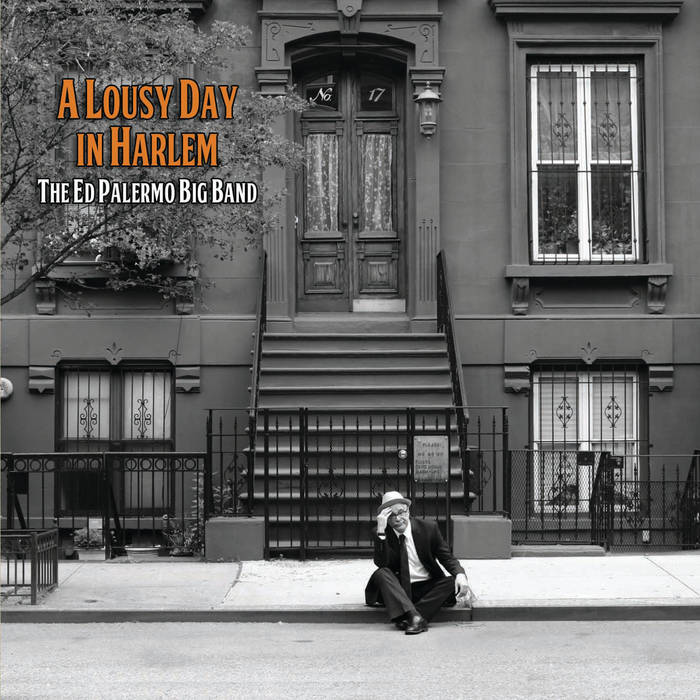 Stuart Blythe Some albums grow on me; some pull me in from the first listen. "A Lousy Day in Harlem" is the second kind of album. I fell in love with the music immediately, and the album has been on repeat for the past week. Favorite track: Affinity.

In a radical departure, jazz’s state-of-the-art orchestra – The Ed Palermo Big Band – has recorded a thrilling program of…jazz! An ingenious arranger, composer and alto saxophonist, Ed Palermo has spent much of the past three decades earning international renown with a series of albums transmuting fervidly loved rock songs by Frank Zappa, Todd Rundgren, and their British brethren into supremely imaginative vehicles for improvisation with his 18 piece jazz big band. With A Lousy Day in Harlem, he unleashes his talent-laden ensemble on a gorgeous array of music by Ellington, Monk, Coltrane, Egberto Gismonte, and his own finely wrought originals. Slated for release on Sky Cat Records, the album captures a master arranger and jazz big band leader at the top of his game, putting his own unmistakable stamp on canonical compositions. Firmly in the tradition, the project reveals that Palermo’s nonpareil gift for recasting beloved tunes encompasses jazz too.

“The thing about this record is, I wanted it to be jazzier,” says Palermo. “We play a lot of jazz in my band, but I’ve been doing Zappa and British Invasion stuff for years and I’ve had these other types of music in my book, jazz tunes that had been close to my heart for decades. I finally felt ready to record these tunes – tunes I’d composed, and tunes I’d arranged. It felt like the right time to show the world another side of the band.”

Palermo doesn’t waste a moment in setting the agenda. The album kicks off with “Laurie Frink,” a surging piece that feels like a theme from a 1970s action film. He rechristened the tune as a tribute to its namesake, a dear friend who played lead trumpet in the band for years. Revered by her peers as a brass savant who mentored generations of trumpeters, “she was just a tremendous musician and a musical partner for decades,” Palermo says. “She used to love this song, so I retitled it after she passed.”

In many ways Lousy Day makes a compelling case for Palermo’s abiding love of luscious melody, like “Affinity,” a winsome piece featuring Cliff Lyons’ expert soprano sax work. And for sheer unabashed beauty it’s hard to surpass Egberto Gismonte’s episodic “Sanfona,” a piece that moves through a variety of emotional spaces without shedding a sense of innocence and discovery. “Brazilians are so much better at creating this kind of emotional material,” Palermo says.

If the album has an emotional centerpiece, it’s Palermo’s “The One With the Balloon,” a playful tune that combines gentle humor, sweet lyricism, and a strikingly graceful tap dance solo in the middle by Nicki Denner. Moving from whimsy to ferocity, he pays tribute to his alto sax hero Cannonball Adderley with a fierce arrangement of Gigi Gryce’s standard “Minority,” which opens with Palermo’s deft orchestration of eight measures transcribed from Cannon’s famous solo.

The band gets Spherical with an ingenious Thelonious Monk medley that opens as “Well, You Needn’t” but quickly sprints into “In Walked Bud,” then references “Straight No Chaser,” and drops hints of “Evidence” too if you listen closely to the rhythm section. It’s an off-kilter tour de force, but not nearly as wacky as his tenor battle “Giant Steps,” a showcase for saxophonist Bill Straub and Ben Kono by way of the dueling banjos in Deliverance.

The album comes rushing to a sensational close with “Gargoyles,” a brilliant piece by Renee Rosnes and Walt Weiskopf that Palermo learned from Billy Drummond’s 1993 album The Gift (though it’s better known from Rosnes’s 2001 album With A Little Help From My Friends). It’s a careening post-bop thrill ride that keys on Kono’s brawny tenor solo and Bailey’s flashing trumpet. And as a sweet kiss off, Palermo concludes the adventure with the appropriately brief foray into rhythm changes, “This Won't Take Long,” featuring his fiery alto.

All in all, Palermo’s Lousy Day In Harlem makes for a thrilling musical outing, even if his very big band failed to show up for the cover art photo shoot. Palermo’s photos were taken on the steps of the same brownstone where Art Kane captured 57 jazz legends and sundry neighborhood kids for Esquire magazine on that fateful summer morning in 1958. His kidding reference to the iconic jazz image “A Great Day in Harlem” makes sense given Palermo’s off-beat, self-deprecating humor and the album’s mission to align The Ed Palermo Big Band within the esteemed tradition and history of jazz.

THE ONE WITH THE BALLOON: Charley Gordon, trombone; Nicki Denner, tap dancing

all arrangements by ED PALERMO

“Ed Palermo is real good for jazz. Why? Because [Palermo] moves his big band to consider any source an engaging good time for receiving ears and eyes.”
– Gary Walker, WBGO ... more

Bandcamp Daily  your guide to the world of Bandcamp